Remember all the EV reviews and test drives by casuals on Youtube where literally EVERYONE constantly mention acceleration of Teslas and how stupid fast they are and whatnot and they do the same for all EV’s actually? Well, if I drank a shot of vodka every time that happens, I’d displace all water in my body with vodka…

Reason why I’m so annoyed by this otherwise entirely benign thing is because people already accelerate like half dead pensioners at traffic lights with petrol cars because accelerating normally will fuck up your fuel economy so badly. But in EV’s with already rubbish range and greater range anxiety and obsession with ecology and “fuel” economy, who gives a shit if Tesla Model XZ 23 Plaid Ludicrous can accelerate from 0 to 100km/h in 1,99 seconds when people driving them will drag their stupid ass from traffic lights like they are already dead behind the wheel and only thing driving them is an auto pilot? What’s the point?

It’s just such a dumb thing to talk about when we all damn well know it’ll be used by 0.1% of drivers and serves no purpose. EV car makers should just use the Rolls Royce’s approach and call performance metrics “sufficient”. Coz if EV can drive, that’s already sufficient. It fulfills the performance metrics.

Ok, this has been my Sunday’s shower thought/rant on Tuesday, so have a nice Wednesday and don’t be a pensioner at traffic lights. Please. 🙂

This is going to be a more localized rant, but I’m guessing this bullshit follows you all in your countries as well. What I’m talking is how we’re bombarded with endless ads for cars with all these insanely low advertised installments payment options that even a student could easily pay off based on what they are advertising. I mean, here’s an example I quickly found…

I mean, look at this amazing deal. Renault Clio E-Tech for 155€ a month! And Renault Zoe for only 179€ a month! No deposit required! Wow, what a bargain! I’m gonna take both!

And while I know Renault has some bullshit battery leasing, I’ve seen the same for VW ID.3 when it was launched and was advertised for like 280€ a month or something like that. VW doesn’t have battery leasing. Anyway, when you do the math, you quickly notice these advertised numbers are just pure Fumier de cheval (horse shit).

Largest number of installments I’ve ever seen was 84 which makes it 7 years. That Zoe for 179€ a month for 7 years adds up to 15.036€. Cheapest, most basic advertised Zoe is 32.840€. Since there is no deposit required as they say, where does the remaining difference come from?

Oh right, it comes in the end when they ask you to pay the remaining 20k. Dafuck is this shit?

This is just straight up false advertising and I might not be versed in trade laws enough, but should we really be for such straight up bullshit advertisement to be banned? Don’t fucking advertise it as 179€ a month when it clearly isn’t anywhere close to that and is actually more like 462€ a month. Totally an “insignificant” difference, right? And that’s just raw cost without any extra fees when buying a car with lease. Or even a regular installments payment. In fact, even when deposit is required, claiming these tiny installments and then hiding deposit under that fucking asterisk should be banned. It’s just so incredibly stupid and serves no fucking purpose.

Imagine if I was advertising you could buy a car for a cost of a coffee a month! And then demand a 40.000€ deposit under a microscopic asterisk. I mean, based on how things are advertised, you apparently totally could. Except it’s total BS and misleading on so many levels it’s not even funny. Just tell it’s 462€ a month for fucks sake. I just don’t get it who are they fooling. Or do they want to turn around people who come to buy one and clearly can’t pay that or something? What’s the purpose of that? And I damn well know there are people who see these numbers and think they actually mean a thing they say.

As much as I like fiddling with computers, I also love cars. I’m not a turbo Jedi just yet (fiddling with engine, mostly because of moronic homologation rules in my country), but I do all the styling myself. Mostly subtle stuff like full interior LED replacement, LED parking/side lights, LED license plate illumination etc. 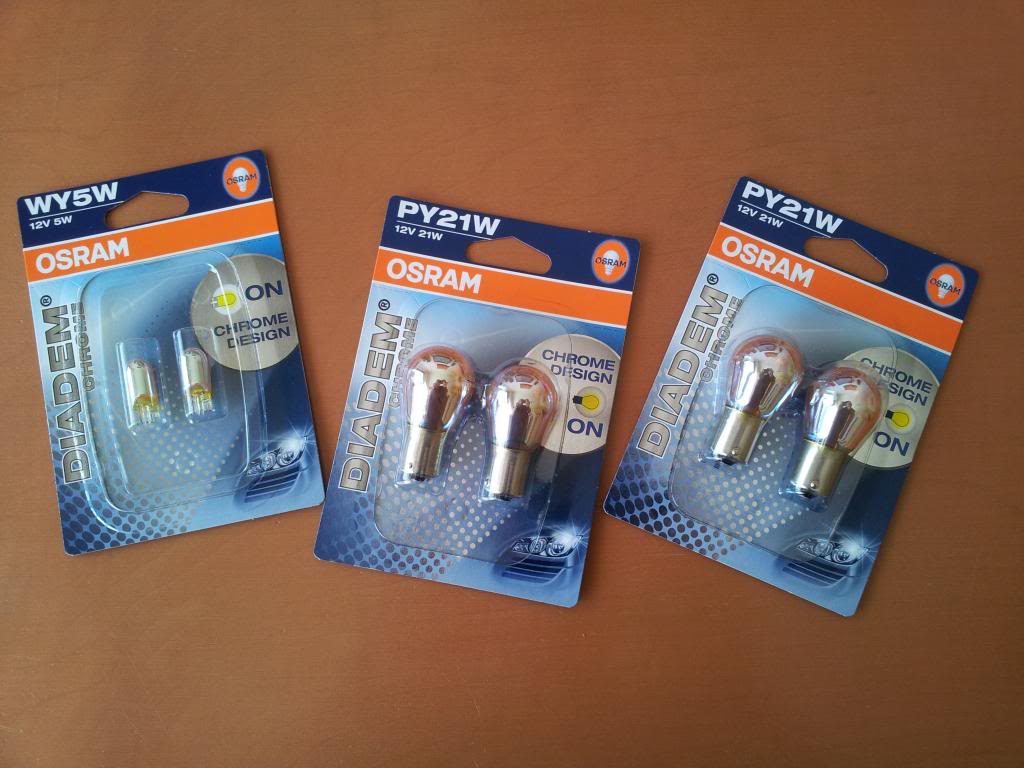 Diadem Chrome promises stylish silver light internals instead of orange ones. Some also refer to it as “fried egg effect”. Can it deliver? I think it can and it did. Check the side by side comparison photos before and after replacement. These are from my car, because I couldn’t find any real good ones on the internet when I was deciding for these bulbs.

Looks pretty good in my opinion. The mini styling project cost me a tad over 40€ and like half an hour of work 🙂 I’m very happy with the results 🙂