I’ve had this bizarre issue where most videos online, be it on Twitter or Youtube had sound, I had sound in Musicbee and in video players, but there were some videos online that were just dead silent. It looked like audio is playing, but I couldn’t hear anything. Couldn’t figure it out for a while till it hit me I’ve done a soundcard driver update recently. The reason was I’m using 2.1 speakers and the soundcard reset itself to 5.1 mode after driver update.

When this happens, videos with mono sound won’t play any audio at all because the mono channel is expected to play on a center speaker which, with using 2.1 speakers, you do not have. Switching back to Stereo mode in soundcard settings forces mono sound from non-existing center speaker into both stereo channels and sound should “appear” again.

So, if you’re having such problem, check your soundcard settings speakers mode to see if it changed by itself to 5.1, causing this problem…

In the past I’ve made a special equalizer preset for super deep bass and people seem to like it quite a lot.

And here is a new preset I’ve been perfecting and testing for almost a year now and I think it’s ready for the public. I call it “Delta” preset because of the very peculiar symmetrical shape. And it comes in two flavors, Normal and Lite. See the dB (Decibel) values on the equalizer images so you can adjust it the same. The examples are for 10 step equalizers, you’ll have to condense it down on your own for 8 or less step equalizers. 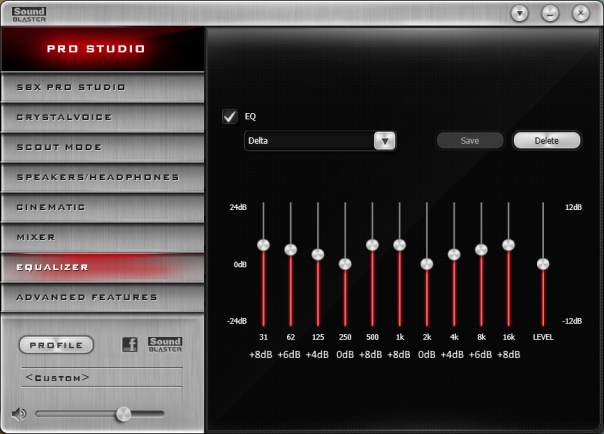 Normal preset enriches the sound quite significantly and you’ll hear sounds you didn’t even think are there. It really brings details to life. Due to quite high mid range segment, it may create slight artifacts on some configurations of soundcards and speakers. You can recognize it as noise similar to “wah” effect being applied to vocals and sounds. If it’s bothering you too much, decrease the 500Hz and 1K Hz sliders a bit, preferably with same level. 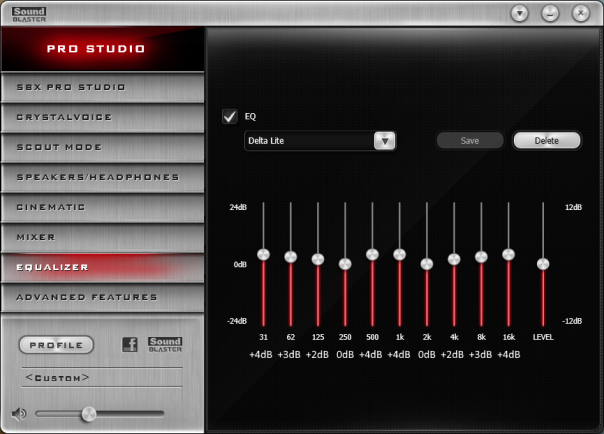 As the name suggests, this is the same design as Normal preset, just with significantly lower boost values. It’s a more subtle effect that still slightly enriches the sound, but doesn’t go all out crazy. Shouldn’t create any audio artifacts.

Now that you know the recipe, you can adjust the intensity of the effect on your own. In general both lower and upper frequency extremes should align with the mid range (in the middle). Then you adjust the curve between all three points. You can of course do it at different angles depending on your taste.