In the past I’ve made a special equalizer preset for super deep bass and people seem to like it quite a lot.

And here is a new preset I’ve been perfecting and testing for almost a year now and I think it’s ready for the public. I call it “Delta” preset because of the very peculiar symmetrical shape. And it comes in two flavors, Normal and Lite. See the dB (Decibel) values on the equalizer images so you can adjust it the same. The examples are for 10 step equalizers, you’ll have to condense it down on your own for 8 or less step equalizers.

Normal preset enriches the sound quite significantly and you’ll hear sounds you didn’t even think are there. It really brings details to life. Due to quite high mid range segment, it may create slight artifacts on some configurations of soundcards and speakers. You can recognize it as noise similar to “wah” effect being applied to vocals and sounds. If it’s bothering you too much, decrease the 500Hz and 1K Hz sliders a bit, preferably with same level.

As the name suggests, this is the same design as Normal preset, just with significantly lower boost values. It’s a more subtle effect that still slightly enriches the sound, but doesn’t go all out crazy. Shouldn’t create any audio artifacts.

Now that you know the recipe, you can adjust the intensity of the effect on your own. In general both lower and upper frequency extremes should align with the mid range (in the middle). Then you adjust the curve between all three points. You can of course do it at different angles depending on your taste.

I was searching for an audio enhancer like SRS Audio Sandbox or DFX Audio Enhancer. The sort of enhancer that sits between your soundcard and Windows OS and processes all audio sources, be it music, movies or games. And today, I found one by mistake.

To be honest, I’ve never heard of this company (Bongiovi Acoustics) before, but after some Googling, it was founded by Tony Bongiovi, an audio producer and engineer. And if that doesn’t convince you, he worked with Bon Jovi, Jimi Hendrix and Aerosmith among many others. They also work with Honda, Toyota and Hyundai for their audio systems using hardware implementations of Bongiovi DPS system to enhance listening experience in cars as well as several other fields like medical applications and other consumer electronics like TV’s.

I’m using this variation of interface skin, but there are few more to choose from.

I had very little expectations if I’m honest, which is why I was blown away even more. I’ve tried many enhancers in my life, from those limited to music players only, to some like DFX and SRS that worked on the same system level, but none of them came even close to Bongiovi DPS.

I personally prefer the Mendoza Speakers preset because it delivers the most detail and punch which is what I want for my music and games. But there are few other profiles that focus on different sound dynamics (like mid range for vocals). The Stereo Expander also helps widening the channel separation. It’s a very subtle change, but if you listen carefully, you can sense it.

Biggest issue with most enhancers is that they work great with one thing and sound horrible with others. SRS Audio Sandbox had this problem and to smaller extent DFX. But with Bongiovi DPS, everything just sounds great. Tried few different songs, from game soundtracks from Deus Ex Human Revolution to Mechwarrior 2 soundtrack. It made my skin crawl, I kid you not. I also tried my standard benchmark song, Lily Was Here by Candy Dulfer. The guitar and saxophone sounded so real it felt like someone is playing it live in the room. Mind blowingly amazing. What’s also interesting is that at least Mendoza profile increases the volume quite significantly and adds tons of details, but is still easy on ears. It’s not harsh and that’s also interesting. Usually these enhancers just make audio so harsh you can actually hear crackling in the background and that’s very bad and makes ears hurt after few seconds of listening.

I’ve also briefly tested it in a game Killing Floor 2. It was the same amazing punchy audio in the game intro videos and it didn’t disappoint in the actual game either. When time slows down with Zed Time, whole room shakes up in bass, but it wasn’t distorted or anything. When Scrakes and Flesh Pounds were announced via in-game roaring voice of those two monsters, it was so majestic I can’t even describe it. And exactly the same applies to the weapons. The Vermint rifle which sounds like a fart gun without Bongiovi DPS now actually has a proper kick and punch to it when you fire it. Incredible. I just realized I have to test this in latest Need for Speed. I’m already sure the car engine will sound amazing 🙂

I was testing all this using Sound Blaster Z and Altec Lansing MX5021 2.1 speakers. Your experience may vary based on hardware you have. Mine is quite capable, don’t expect too much from generic plastic 2.0 speakers with on-board audio…

If my words alone haven’t convinced you yet, give it a try. Bongiovi DPS is a free program. Only limitations are locked Bass and Treble controls from what I can see. Those two settings are restricted to Pro version which can be bought for a fee I guess (can’t seem to find more info about it at the moment). For some reason, they still work though 🙂

This is one of the rarest, hard to find drivers for Analog Devices SoundMax Audio chips with included BlackHawk control panel which features SonicFocus audio enhancements for deeper bass and richer sound.

I’m using a rather ancient ASUS Rampage II Gene motherboard with ADI AD2000b audio chip and these drivers are the latest I could ever find with BlackHawk panel (others are the same version without BlackHawk). They are specified as Windows 7 drivers, however I’m just using them on Windows 8.1 64bit and everything works perfectly. ASUS switched to Realtek after this so everyone still on SoundMax are stuck with this one…

I’ve been hosting it on my OneDrive for ages but forgot to make a blog post about it. Hope this will help people get it working again. 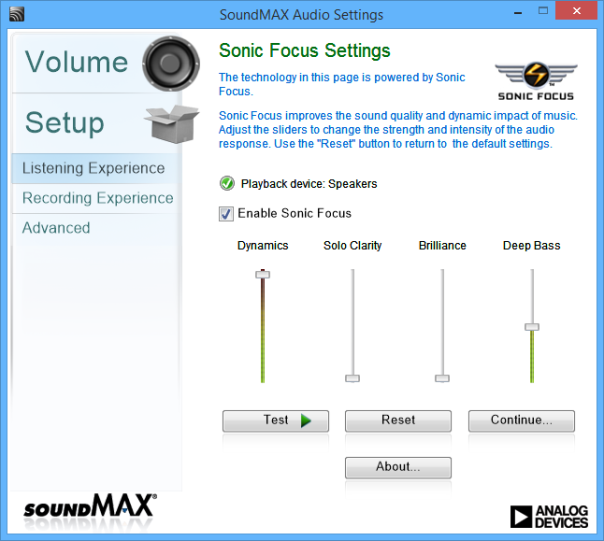 Supported audio chip: ADI AD2000b (may work on others)

I have just tested this driver pack on Windows 10 64bit and it’s working flawlessly. Installation went without any problems, device is detected as SoundMax HD and SonicFocus audio enhancements function as well. This is good news for all the SoundMax users!

To enhance compatibility of playing music in media player while playing games on Win10 with SoundMax, do the following:

This resolved music playback corruption in MusicBee while playing Infinifactory. It might apply to other games as well.

Do you happen to own a Sound Blaster Recon3D or Sound Blaster Z/Zx/ZxR and your “Surround” option keeps on getting disabled for no obvious reason?

Yeah, that one. Surround feature, as much as people hate it for music and movies, it’s fantastic for games. It makes sounds that pass through different speaker channels a lot smoother or gradient if you want. When there is a stationary continuous noise in a game, try rotating around your own axis. Sound will pass from one speaker to another. Without Surround feature enabled, sound will usually be cut and transitioned to another speaker where with Surround enabled, it will fade away in a more natural way and transition to another speaker channel, creating a lot more natural and smooth audio environment. Similar to how our ears perceive it in real world.

Anyway, this feature was getting disabled on its own and I couldn’t figure it out why. And then some nice chap gave me an answer on Creative Labs Forums. The culprit for this is ALchemy. If you use Creative Alchemy to re-enable DirectSound3D audio for older games, it will disable the Surround when you run that game. After testing, that was indeed the case, because I’m just playing F.E.A.R. and I also use ALchemy so I can have HW Audio Acceleration and all the EAX HD effects fully enabled. Every time I ran F.E.A.R. Surround setting was disabled.

There is a partial solution to this until Creative fixes it. You can Alt+Tab (or Ctrl+Esc) a game, open the above Creative panel and manually re-enable Surround. It does work.

Hope it helps for anyone having the same annoyance…

Do you still happen to play NFS The Run multiplayer and you totally hate god damn morons who have their microphone plugged in so you hear everything but the game sounds. No more! I can now properly enjoy the multiplayer in Need for Speed – The Run. Wonder how? Here is the guide for Windows 7 and Windows 8, but I’m guessing that same method can be used in Vista…

1. Right click on the speaker icon next to the clock (taskbar) and select “Playback devices”

2. Under “Playback” tab, right click on device that you’re not really using (in my case it’s SPDIF Out on my X-Fi Forte) and select “Set as Default Communication Device”

Doing so will leave all the usual sounds (car engine, in-game music etc) play as usual, but the voice communications will be redirected to non-existent output which doesn’t really playback any sound to your ears because no speakers are connected to that output.

3. Run the game and enjoy without any dumb noises distracting you in Multiplayer mode.