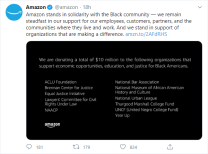 It’s not really a new thing, but it’s been grinding my gears for quite a while. You know how after every social incident, all the corporations that give so much fuck about our well being start virtue signaling campaigns by painting their avatars in LGBT rainbow colors, making them black and white to be compassionate with black communities and all other similar bullshit?

Like, you’re a fucking giant corporation whose sole existence is making money through exploiting of low wage workers of all races and genders to make even more money and here you are screaming how much you give a fuck about everyone. Just shut up. Just shut up all of you. You disgust me.

They especially disgust me when they scream how much they care about one’s voice and well being, yet the exact same corporation keeps on silencing people. You know, like Google is silencing and censoring results for China because that sweet sweet Chinese cash is just too hard to resist. Fuck those Chinese people standing against oppressive regime. We’re with black people now. You’ll just have to wait for your turn… Or Amazon being all loud how they are donating 10 million dollars to some black community organizations. Meanwhile they were (and still are) treating their employees like shit and forcing them to work during a pandemic in garbage conditions with inadequate protection. I’m sure a lot of them are also black people. Where was your solidarity and care for that? Oh, it just matters now because some high profile incident took place and all of a sudden everyone fucking cares.

No one gives a shit if some faceless corporation stands in support with LGBT people or with black people or with disabled people or with fucking gingers. NO ONE FUCKING CARES. As a company, you’re EXPECTED to behave in a way that’s not racist, bigoted or exploitative. And no fancy avatar or colorful (or black and white) image will change that if your actions don’t reflect what you’re preaching. No one expects or demands you to virtue signal this bullshit (except social justice idiots who attack and harass companies that don’t peddle to this bullshit). What we do expect is that you don’t censor people’s voices if you’re a social platform or that you don’t reject black people because they are black or you don’t hide results from your search engine because a big and influential regime is demanding that from you or that you don’t exploit people for low wages in shitty conditions. No amount of rainbow avatars and black background images will ever change that.

So, stop kidding yourself that your virtue signaling fucking matters. And I can’t believe people are so shallow and clueless that they applaud this when corporations do it. As far as I’m concerned, it’s disgusting and hypocritical. Do what you preach and don’t be two faced assholes by default and no one will give a shit if your avatar is not in rainbow colors. All this shit is EXPECTED from by you by default. And if it’s not, we’ll call you out on it. Until then, shut your fucking mouth and stop virtue signaling all over the fucking social media. But I guess they all doubt their behavior so they need to artificially reinforce it by painting shit on social media. Sad and pathetic.

3 thoughts on “Corporate virtue signaling is such massive cringe”