I’m not gonna go full attack rant on this one like feminists do it for every little shit out there, it’s just an interesting observation while I was writing responses on this topic in my browser and decided to go and test all the other major browsers as well…

When talking gender equality issues, words like “misogyny” and “misandry” often come up. “Misogyny” means hatred, dislike, or mistrust of women, or prejudice against women, where “misandry” means hatred of men (funny how definition is a lot shorter for men). Definitions taken from dictionary.com

Now, here is the interesting observation that web browsers or shall I say dictionaries in them are sexist. They acknowledge the word “misogyny”, but they don’t do the same for “misandry”. They underline it with red and offer you correction. I’m using US English dictionaries. Lets see what they’ll offer me as correction for my “misspelling”…

Firefox 34.0.5
Nice job Firefox, offering me what is essentially a female name as correction for a word that defines hatred of men. Bravo you sexist bastards. 😀 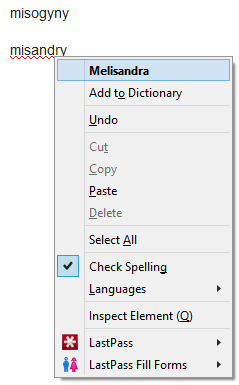 Chrome 39/Iron 39 and possibly every other Chrome based browser
Yup Chrome, you clearly did misaddress the spelling error…

Opera 12.17 (Presto engine)
Opera, in a Scandinavian tradition went brave. So many things to choose from. Too bad they are all incorrect…

Yup, patriarchy is clearly working /sarcasm, if none of the browser dictionaries even acknowledges the word “misandry” as a correctly spelled word. And to take things further, not even WordPress dictionary acknowledges this word…

WordPress
What a misery…

Feminism conspiracy I tell you that!

6 thoughts on “Web browsers are sexist”