I have 3 fundamental questions here:

So, lets just start at the beginning. Where were these so-called activists when GTA5 was released back in September 2013? It was the exact same game, but it somehow slipped under their radars. Why was that? Because it wasn’t released on PC and now it will be? Are they being discriminatory towards PS4/Xbox One and PC gamers, but not towards PS3 and Xbox 360 gamers? What is it?

Secondly, after checking the historical data, Australia has banned and then unbanned every single Grand Theft Auto game that has ever been released. This includes GTA3, Vice City, San Andreas, GTA4 and now GTA5. I frankly don’t know why they even bother. I just have a recommendation for lobbies in Australia that make dumb decisions like this. Grow a pair of balls you lot! Don’t just ban every single game idiotic activists suggest you should ban. Say fuck off when they walk in with petitions like this and demand unbiased research that proves violent games like this actually are the source of all the misogyny and hatred towards women. Because that was the reason for banning the game. Of course they entirely disregarded the fact that game allows absolutely the same misandry toward male in-game characters (NPC’s). You can literally walk through GTA cities and exclusively and only kill male NPC’s. And no one will ever get bothered by that fact or ability given to the player. Shoot one virtual hooker and all hell breaks loose, just because you shot a female NPC. Dafaq people!? How more full retard can you go?

Thirdly, studies through they years have repeatedly and continuously proven that there is absolutely NO correlation between increasing consumption of “realistic” games and violence manifested as a result in real world. In fact, the crimes have and are continuously decreasing through the years while games sales are soaring. Here are some very colorful examples that will prove a point even for those who aren’t interested in reading very long in-depth studies. You know, the ones done by actual experts and not some douchey activists that got offended by something.

I’ll exclude Doom games because they are as fictional as the Bible and I see absolutely no correlation between shooting monsters from hell and committing violence in real world. However, there are games released in the same time period that allowed you to commit torture and murdering of hundreds and thousands of innocent virtual characters, including women. Both Postal games, Grand Theft Auto 1, 2, 3, Vice City and San Andreas. All released prior year 2004. There was also game Soldier of Fortune released in 2000/2001. One of the most gory and realistic human body deformation games available at that time which got even further upgraded with second installment of Soldier of Fortune II: Double Helix in 2002 which pushed its simulation of body deformation using weapons to even higher level pretty much exceeding what really happens to human body when attacked by lethal weapons. Manhunt, another super gory and cruel game released in 2003 and so on and so forth… And yet, the crime levels have just kept on dropping. Why? Frankly I don’t care. It just proves that games aren’t the cause, because if they were, crime levels should be dramatically increasing, because games are becoming even more realistic visual vise as well as with options to do more and more violent things in games. But it just doesn’t reflect that in real world apparently.

Again, violence is declining where games sales are absolutely soaring.

And the study performed by Dr. Christopher J. Ferguson, an associate professor with Ph.D. in Clinical Psychology at Stetson University in Florida (data includes years from 1996 till 2011, time period in which games dramatically gained in visual and interactivity realism).

In fact, if I look at myself as a gamer and a regular consumer of incredibly violent games, I sort of steam out all the need or urge for any sort of aggression in games and I don’t really feel any need to do it in real life what so ever. I mean, why bother beating, stabbing or shooting someone in real life and face criminal charges from justice system, if I can do it in games without any legal consequences or anyone actually getting hurt. Psychologically or physically. It’s just bunch of pixels that have no feelings, no senses, no self-awareness that goes beyond scripted data feed into the game by the programmers. It’s again the damn separation of fiction from reality that I’ve continuously ranted about in the past. You can’t judge majority of gamers who are perfectly able to separate one from another just because of few very rare cases of crazy people who committed mass shootings or violence against women and they just happened to play the games. Every single damn time, media brings this crap up and fails to provide a single piece of evidence that the games were actually the cause for those individuals to go mad.

Which also includes misogyny accusations that are being plastered all over the place by nazi feminists lately and which was also the major reason for the Australian ban of the GTA5. Stop cherry picking examples from games and entirely ignoring the fact that in the exact same game you can exclusively torture/kill male NPC’s. So you’re basically killing pretty much exclusively male NPC’s. But this somehow doesn’t bother feminists. Why? What makes mass killing of male NPC’s acceptable, but killing just few female NPC’s creates such massive hatred towards games. And it’s not even encouraged, because committing any sort of crime in GTA results in more and more law enforcement breathing behind your neck.

Killing prostitutes is not even encouraged in GTA5!

Contrary to media nonsense feeding us on every corner lately regarding this particular matter in GTA5, the health increase past 100% is NOT a reward for killing a prostitute in a GTA game, it’s just an end result of player deciding to do so AFTER he has ALREADY gained the bonus from the sexual activity. Because game DOESN’T care what gender a character is in the game. It’s violence permissive towards ANY character. Imagine how moronic it would be if only female characters were somehow excluded from any ability to commit violence towards them. Besides, it’s not like the game brings up interactive option right after sexual activity where you could pick between “Kill a prostitute” or “Don’t kill a prostitute”. It’s not there at all. But when the sexual sequence ends, you return in the general interactive free roam world where you are indeed allowed to do such a thing. But is not encouraged and doesn’t give you any bonus. In fact only thing it does give you is 1 extra star to the felony meter (which, the more you have, the more aggressive law enforcement will be towards you). Which is associated with a bad thing and not something you’re encouraged to do, because police will arrest or shoot you for that.

Just like you can punch a police officer who is walking down the street in GTA world. Or you can decide not to. It’s not freaking mandatory. It’s just an option in the game like billion others and still expanding with every new GTA release. Inclusion of option doesn’t mean you strictly have to do it. Just like ability to commit mass shooting in real world doesn’t encourage or force me to actually do it. I prefer not to because I’m aware of the consequences and because I’m not a freaking psycho. 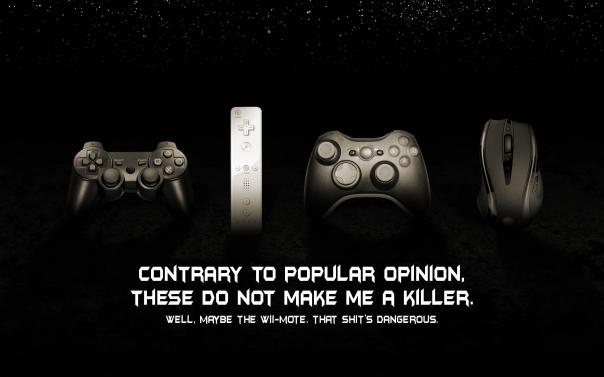 On that bombshell, the above image perfectly summarizes my feelings toward hatred against gamers. We are not a bunch of psychopathic killers and misogynistic bastards. We are just gamers who like to play any kind of games, be it violent or non-violent and actions in those games do not reflect our behavior in real world. How hard is it to comprehend that?

1 thought on “GTA5 banned in Australia”